This morning I went to supervise Geoffrey, a student who saw that a large school in Mukono lacked a formal chaplain, and asked the school if he could come on Sunday mornings. There are two services: one for the Catholics, and one for the Protestants. I haven’t been to this school in a while, and as I climbed the hill, I wondered which building it was in. I asked one of the elementary students where the Anglican service was, and she wrinkled her nose at me and reframed, “Do you mean the Protestant service? I’m a Protestant.” I estimated that there were around 600 students in the Protestant service; there were at least as many in the Catholic mass in the next building.

Geoffrey asked me to read the Gospel, which was Matthew 5:43-48, about loving your enemies and praying for those who persecute you. With at least 600 students from the entire education spectrum with very few adults, you can imagine that the service was a bit hectic. I was certain that no one was paying attention. 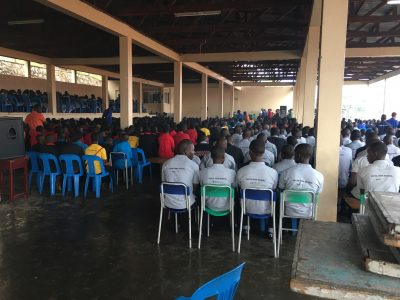 However, I was very wrong. As we were preparing for the Eucharist, the warden [usher] handed me a note from a student. She asked me how to love and forgive someone who had hurt her. She included her phone number, but the students are not allowed to have phones, so I wouldn’t be able to call her until she gets home in early May.

I asked the warden if it was possible that the student could meet me after the service, and she said she would try. Happily, she succeeded, and the student was waiting for me after many of the students dispersed.

This precious and delightful child of God shared her story with me, and it broke my heart. I wanted to bring her home and protect her. I wanted to pray so many healing prayers with her. I wanted to right all the wrongs that have been perpetrated against her. But I only had a few minutes after church to talk with her.

So I did pray with her, and talk with her. She now has my contact, and has said she will check in with me when she gets her phone back. She’s also going to send me the first 25 (!) chapters of a book she’s written. I’m hoping this is a productive way of her to process all that’s happened to her.

Please pray for this precious gem: that the Lord continue to heal her heart. I’m so grateful that she chose to seek help, and humbled that she chose me.