On April 4, my sweet Meri died. I started this post a couple weeks ago, but it’s been hard to write; I think that writing it for the interwebs makes it a bit too real.

I am struggling with a bit guilt over this; she wanted breakfast at 2:00 am, and since there is no universe in which that was going to happen, I put her outside. She never came back. I found her nearby while on my way to chapel that morning, and spent the service trying to alternately hold back and wipe away tears. The current theory is that she found poison that had been put out for the feral dogs, and I can’t help but wonder whether if I’d fed her this could have been averted.

The Dennisons, from whom I inherited Meri, have been incredibly gracious and have absolved me of any guilt. They pointed out that Meri had likely far exceeded her nine lives even before she came to stay with me.  Let’s remember that this is the kitty who would play with monkeys. Sigh. 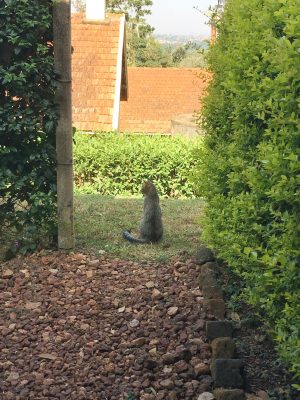 I am missing my Guardian of the Galaxy (or at least the Honors College). I miss seeing her sitting on the final set of steps as I climb to my flat. I miss seeing her on the verandah. I miss hearing the girls next door greet her as they come and go. I miss having someone to talk to, even if she woke me at horrific hours. 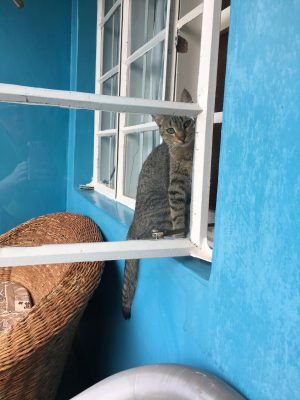 Ugandans tend to be very pragmatic about death, especially about animals, as they tend to be more house workers rather than pets. But a few students have by and asked have where Meri was, and when I told them she was with Jesus, they were very sad. Their sympathy and empathy touched me deeply.

Meri was therapy for me when the Dennisons left; not only did I have a small reminder of them, having someone to talk to and care for gave me something to focus on. Even though I could never teach her to tell time, she was very bright: I’d tell her “let’s go,” or “time for chapel,” or “time for lectures,” and she’d head for the door. Well, unless she was feeling teenager-ish, and then she’d whine and we’d fight to get out the door.

She was a gift, and I’m grateful for the two years I had with her.

This site uses cookies to ensure that you have the best experience. If you continue to use this site we will assume that you are happy with it.OkayPrivacy Policy